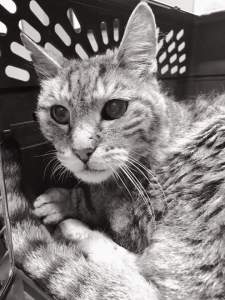 He grew up with them and grew old with us.

He was a perfect, gray tabby.

Early in his life, about 6 or so, he disappeared.  He dragged himself up to the house after two or three days drooping and dragging his tail.  The Vet said it looked like he may have been hit, maybe a car.  “You will probably need to put him down soon; when he loses control of his bodily functions it will be time.”  Ernie lived from then on with a droopy and somewhat unmanageable tail; but otherwise, he managed all his functions just fine.

In 2005, when Katrina hit, Ernie escaped outside.  He knew something odd was happening and I suppose his instincts told him to get outside, free to move as needed.  The security of the house appeared less secure to him than to us and he bolted through an open door.  He was missing for several days, but finally came walking up one day as if nothing had happened.  He survived 120 mph winds for hours and several days in the hurricane ravaged neighborhood on his own.  I guess those cat instincts were enough.

In 2006, he tolerated our move to Kansas City.  I am not sure he ever forgave us the winter snows, but he did very much enjoy stretching out in the hot sun through the much less humid summers KC offers over south Mississippi.  As he began to decline earlier this year, our goal was to allow him one more summer.  He took advantage of every moment, stretched out under the sun most days, moving to the shade when he needed to cool off.

In the end, his body just wore out.  His cat-ness expired.

Ernie had his last summer; dying today, the last day of summer 2017, his 18th summer.

The Bible readings for the coming Sunday at St. Paul's Episcopal Parish, KCMO

Truth based on facts

George Lakoff has retired as Distinguished Professor of Cognitive Science and Linguistics at the University of California at Berkeley. He is now Director of the Center for the Neural Mind & Society (cnms.berkeley.edu).

Essays about America's national myths in the past, present, and future -- by Ira Chernus

So This Priest Walks Into a Bar...

Beer, music and a thirst for God

You Think Too Much

A blog for those who firmly believe this is impossible

You decide who wins the Golden Halo

Thoughts from the people in the pews at St. Paul's, KCMO

Bonhoeffer from an Evangelical perspective

Youth Ministries of the Episcopal Church